The Seventh Annual Runaway Open is booked solid at a record 120 players with waiting list enabled and we've expanded it, so that as many Phish golfers who are interested can take part in the fun and fundraising, wherever you are.

Those on-site this Saturday will be part of our largest outing yet: sixty (60!!) golf carts, 22% larger than last year, with gift bags twice the size! We've already had 6 cancellations, and been able to fill them from the waiting list. Hopefully there aren't any more conflicts, but the waiting list is now empty, so sign up if you're interested, and we'll let you know as soon as there's a spot.

And now those not coming to Denver - or not able to golf on a show day - can join a virtual tournament, using the same 18Birdies app that we used for the Fifth Annual in 2020, at the height of quarantines (and a cancelled Dick's run). You can play on any course, anytime from September 1 to September 7.

Those who participate in the provided Virtual component and make a donation of at least $50 to the Mockingbird Foundation during that window, will be sent the two limited-edition event merch items (a divot tool with a magnetic marker and pencil sharpener, and a mini bluetooth speaker, both in the same forest green of all Runaway Open merch, and both with the Runaway Open logo) and other surprises pending availability.

To play, join tournament https://18birdies.onelink.me/IdkR/c7u9zwcx. You'll also need the tournament code 4824. Alternately, to follow the leaderboard and via the gallery without playing, use gallery code 9547.

Those participating on-site on September 3rd may also be interested in joining the virtual tournament. It has lots of groovy services embedded, there's a free trial period to test it's distance and training features, and there's a gallery and chat space that the 120 players on-site might enjoy using.

Regardless of when or where you play, dance wiggly and hit 'em straight. 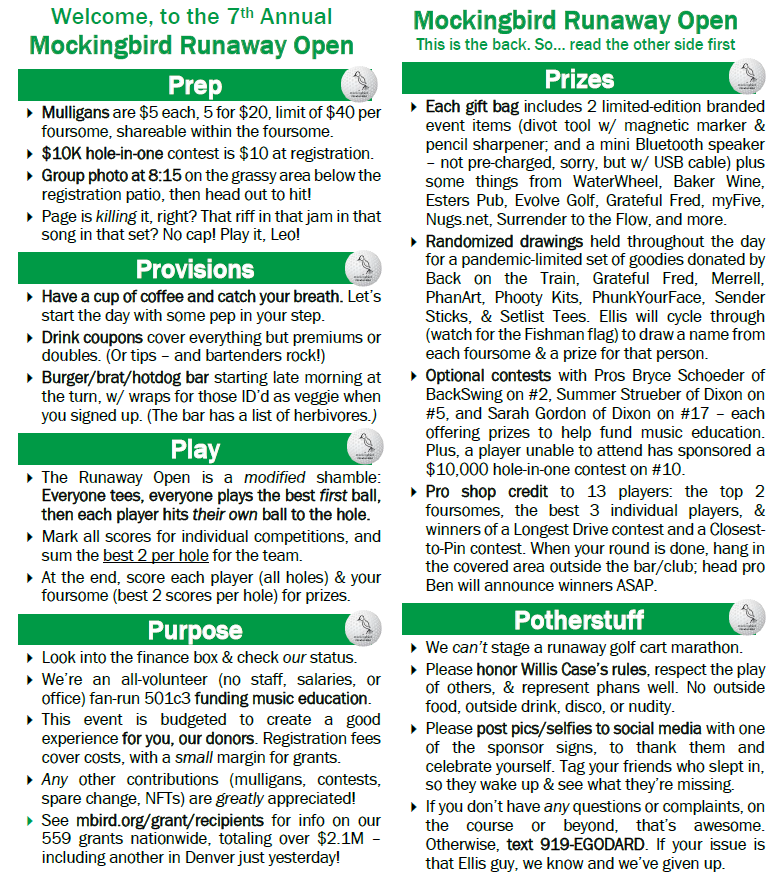 If you liked this blog post, one way you could "like" it is to make a donation to The Mockingbird Foundation, the sponsor of Phish.net. Support music education for children, and you just might change the world.

It was a blast as in the past, thank you Ellis!
Score: 1

Fun with Setlists Check our Phish setlists and sideshow setlists!
Phish News
Subscribe to Phish-News for exclusive info while on tour!